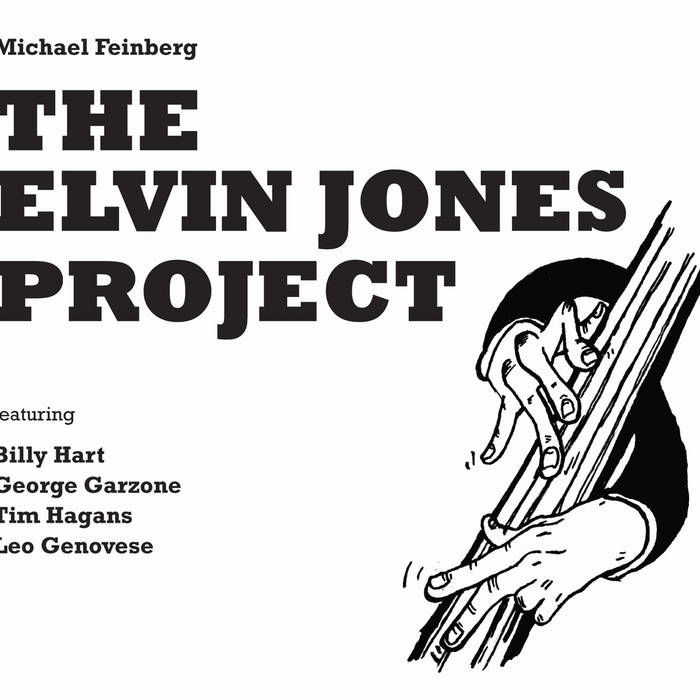 “Michael Feinberg is a very talented young bassist. He is a bassist to keep an eye on. He has the flexibility, energy, love of the music and intesity necessary to make a difference NOW!!!”
- John Pattitucci

The classic John Coltrane Quartet of the 1960s was one of the most influential ensembles jazz has heard. The group’s influence has continued to spread in the world of contemporary jazz, as new generations of performers have trolled the Quartet’s catalog and those of its illustrious sidemen.

Twenty five year old bassist/bandleader Michael Feinberg was particularly inspired by the core of Coltrane’s rhythm section: drummer Elvin Jones. While he perused his favorite drummer’s catalog, Feinberg found himself drawn to the interplay the legendary percussionist had with a multitude of bassists. Feinberg soon discovered that his favorite bassists had had a significant musical relationship with Jones. The study of these relationships became the root of Feinberg’s project and subsequent recording: The Elvin Jones Project.

Feinberg has been a part of the New York City jazz scene for only a short while but has begun to make a name for himself as a composer, bandleader and accompanist. The bassist was born and raised in Atlanta, Georgia and received his bachelor of music degree at the University of Miami followed by his master’s at New York University. Since then, Feinberg has worked alongside legends and progressives alike including Billy Hart, George Garzone, Jean-Michel Pilc, John Scofield, Jim Black, Peter Evans, Ambrose Akinmusire, and Lee Ritenour, with whom Feinberg recorded for his upcoming Concord release Rhythm Sessions along with bass greats John Pattitucci and Christian McBride.

Feinberg’s third recording as a leader, The Elvin Jones Project, was inspired by the relationships that Jones established with bassists Jimmy Garrison, Gene Perla, George Mraz, Richard Davis and Dave Holland. Feinberg decided to create an ensemble that would tackle compositions reflecting the link between these rhythmic pairings without emulation. As Feinberg was set to channel the vibe of these various bass players, he enlisted the great drummer Billy Hart to substitute for the deceased Jones.

Two years younger than Jones, Hart had a close, brotherly relationship with the drummer. The two had been good friends and Jones’s techniques had rubbed off onto the younger player. Feinberg chose Hart for this project because he felt that Hart played with a similar style as Jones, with an emphasis on the 1 while most drummers focused on the 4. Hart also possessed a certain “swagger” that Feinberg liked: “He can bang the shit out of a drum.” Upon their first meeting, Hart remarked to Feinberg: “Elvin would have liked playing with you!”

The other members of Feinberg’s ensemble include two of the most inspiring musicians of the past few decades and a young lion. Saxophonist George Garzone - who co-produced the record and who had once played with Elvin - and trumpeter Tim Hagans are featured as a well-seasoned frontline, while the up and coming Leo Genovese – a member of Esperanza Spalding’s ensemble - holds down the keys.

The boisterous take on “Miles Mode” features an effervescent solo from Garzone echoing the early blues drenched tone of Coltrane. Genovese’s intense solo pushes the boundaries of jazz language into the avant-garde while Feinberg closes it out with a nice solo exploration. Feinberg’s intimately bowed bass introduces “Nancy with the Laughing Face,” a lovely ballad highlighting the tight rhythm trio.

After he left the Coltrane Quartet, Jones led a number of ensembles with a variety of bass players. He recruited Gene Perla because of the bassist’s virtuosic solo capability and his advanced harmonic approach. Perla was featured in a number of risk taking ensembles that pushed the limits of jazz and fusion. The tracks Feinberg orchestrated were outtakes from two 1970s sessions, Steve Grossman’s “Taurus People” (Live at the Lighthouse Vol. 1, Blue Note 1972) and Frank Foster’s “Unknighted Nations” (At the Point In Time, Blue Note 1972).

Feinberg begins “Taurus People” with a duet between his bass and Hart’s drums. The off kilter composition finds a balance between group interplay and solo expression, most notably that of Genovese and Garzone. “Unknighted Nations” is a slightly funky grooving number that provides expert solo spots for guest guitarist Alex Wintz and Mr. Hart.

“Earth Jones” opens the album with a hazy, electric vibe, prodded by Genovese’s Rhodes and Feinberg’s insistent bass pulse, while the uptempo “Three Card Molly” is a spritely workout for the ensemble. Garzone’s mysterious tenor highlights the former, while Hagans’s dazzling trumpet sparks the finale.

Though there wasn’t a long-term track record, Feinberg found the collaboration between Dave Holland and Jones on guitarist Bill Frisell’s Bill Frisell with Dave Holland and Elvin Jones (Nonesuch, 2001) particularly noteworthy. Feinberg’s original composition “It Is Written” inspired by the music presented there is a hazy, warm composition swaying at its own pace with the help of Wintz’s guitar and the nudge of Feinberg’s steady bass.

Feinberg began this project as a means to explore his favorite bassists and, in the process, discovered a love for the music and legacy of drummer Elvin Jones. As Feinberg continues to explore this catalogue we can expect many more great recordings to come.

Bandcamp Daily  your guide to the world of Bandcamp